While making this flowchart I learned a lot about different symbols, organization and design of a flow chart. With the symbols, the rectangles/squares represent the game checking for different processes, which are later represented by rectangles with lines on the inside. The rectangles can also lead to diamonds, which represent different decisions. Finally, the rounded rectangles represent the start or finish of the game. As I write this, I’m now realizing I probably should add in a couple more rounded rectangles to make things more clear. As for some picky details, I learned that in a flow chart you always want the arrows moving down or to the sides or directly up, never diagonally. The arrows should also have sharp edges, not rounded ones. Finally, everything should be spaced neatly, organized, and sequential to the process you want the actions to happen in. All in all, making this flow chart has forced me to look at my game idea from a different perspective, and I think it made all the choices I have to make about my game seem a lot simpler.

For this game, I learned a lot about basic scripting, animation, components, and more fundamental concepts of building a game in Unity. When I first started this project, I was already running into problems (being me). The first thing I did wrong was make the game in 3D instead of 2D, and then I became extremely confused when all of a sudden I couldn’t import certain sprites into my hierarchy view. To solve this problem I asked Bryce, who sits next to me, and he pointed out my mistake and also cracked a couple jokes about my IQ. The next problem I ran into was writing the script. As it was my first script, I didn’t realize how nit-picky you had to be with all the little semi-colons and periods and indents, so my first draft didn’t work at all. I had to go back through the tutorial’s script and compare it to my own about 10 times to get it completely right. The third big problem I ran into was recording the animation. For some reason, as I followed the tutorial, the recording button for them started automatically. On my computer, I figured out I had to start recording my animation manually, but after around the fifth animating attempt. Unfortunately, after I finished animating, I left on a trip to California for the week. I took my laptop with me and actually redid everything I had already done, and much faster as I knew what I was doing this time, but I still didn’t have the time to finish the game. This is also why my screencast is recorded in the personal edition, in case you were wondering. All in all, this tutorial was a great way to get introduced to Unity and I learned a lot and solved a lot of problems.

Click here for the link to the Flappy Bird tutorials

For this blog post I have analyzed 3 games in order to learn more about how to build my own game in the future.

The only rule of the game is to not hit the side of the track, and it is also the only way to die. You can accumulate coins by completing the missions given to you or by running your car through the coins on the track while driving. While driving, you can not only accumulate coins but also shields, which will protect you for a short amount of time if you happen to run into the side of the track, but then will disappear. The game is challenging because to steer you have to rotate your finger around the wheel but also follow the track, or you can change your control so you’re tapping either side of the screen to turn left and right. The steering controls are what make the game harder than other driving games because it is more difficult to master. The track also progressively becomes more difficult as you continue to drive.

The primary goal of the game Finger Driver is to gain as much distance as possible in the track without hitting the sides of the track. The separate goals, which I mentioned in Task 1, are to accumulate coins through completing missions or driving. These coins can be used to purchase new cars. The genre of the game is a 2D Top-Down driving game. (?) The game requires only one mechanic, which is steering/driving. There is no mechanic for speed, or something to make the car go, as it moves at a constant speed automatically for as long as you play. The game is very easy to navigate, as the layout of the game is very simple and there are only 2 main menus and the design is based off of simplicity to appeal to the player. The player finds motivation through beating their own high score, but also by gaining more money and completing missions (which help you gain more money). I do not think that the game is balanced between the risk and the reward though, as there is a very limited amount of cars you can purchase with the coins so once all the cars are purchased part of the motivation is lost. Technically, you can get more cars by watching ads (4 ads per car), but that’s sort of lame and takes away from the main goal of the game. So, once all the cars have been purchased, there no longer seems to be a point to complete the missions or to earn more money while driving, as you can no longer use the money. This leaves the sole motivation of beating your last high score, which makes the risk greater than the reward. Of course, before the cars are purchased, the risk and reward are more balanced.

Games that use 3D are generally more immersive with the main character, or more story oriented. Such genres that fit well with 3D are survival, fighting, dance, sports, first-person shooter, etc. All of these genres rely more heavily on the characters. The actions required for some of these games also flow better with a 3D environment because the intention is for them to be more realistic. The controls also have to be more immersive and dynamic for the style of game, which will fit better in a 3D environment.

2D games will work best with genres such as platformer, puzzle, sidescroller, etc. This is because the games are based of simplicity, and is why they appeal to audiences, so they do not require the immersive plot that a 3D game will. A 2D game has reasonably basic graphics, controls, objects, etc, and this is just because of the genre of game. A 3D game with super basic controls and graphics wouldn’t be very appealing just as a 2D game with a super immersive plot and character depth. This is because with a game that has such depth to it, players want to see the design of the games to match the depth. It doesn’t make the game better or worse, just changes the appeal and to whom.

I learned more about how different aspects of game design appeal to different audiences, and how every element contributes to the overall feel of the game. This helped me learn to identify different game genres, what their target audience is, what the game’s goals and objectives are, the narrative of the game, and the overall feel of the game. This will help me build games in the future because I will be able to identify and make decisions on the elements listed above. 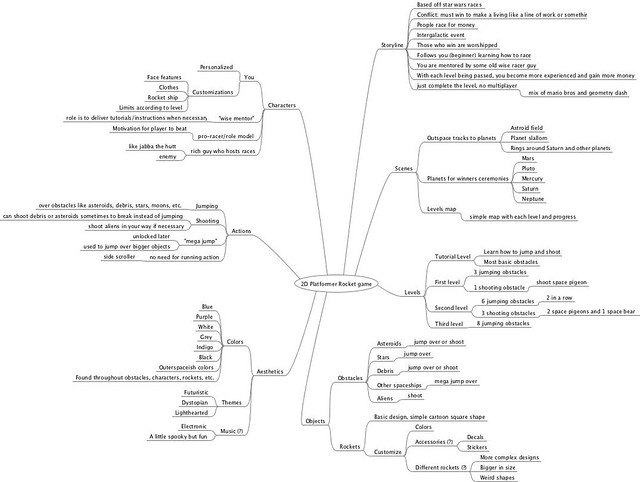 For this game, the idea will be based off of the phone game Geometry Dash but with rocket ships. It is a side scroller and a platformer and requires jumping and shooting. The object of the game is to complete each level and to earn money for completion. The more money you have, the more customization options you will have for your rocket ship. 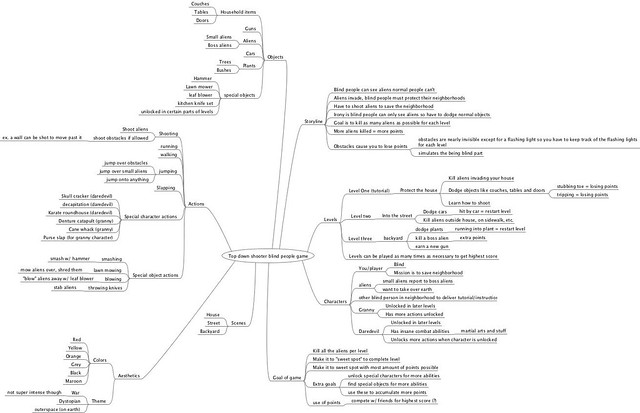 The Earth is dying because of global warming, is really a bunch of aliens basically toastering the world. Only blind people can see the aliens, but nothing else. Must figure out how to kill the aliens to save the Earth but also get around basic obstacles because they are blind (couches, how to drive a car, etc.) Dumb things like stubbing their toes are how they lose life points. Simple formatted game, sort of complicated story line. Fun and light aesthetic, bright colored aliens with everything else dark to put emphasis on blind factor.